Created in 2007, Papier is the most important art fair in Quebec. The Montreal event is a driving force in the Canadian contemporary art market and is a space that creates opportunities for exchanges and encounters between the general public, art enthusiasts as well as professionals from the visual arts community.

An AGAC flagship project for now thirteen editions, Papier brings together forty or so of the most prestigious Canadian art galleries each year, both members and non-members of the Association, allowing the public to discover nearly 400 artists.

Over the years, the fair has been awarded prestigious distinctions, including the Grafika award for its graphic identity, an award for its architectural design and has been named four years in a row by BizBash Magazine in the Top 100 Events in Canada. 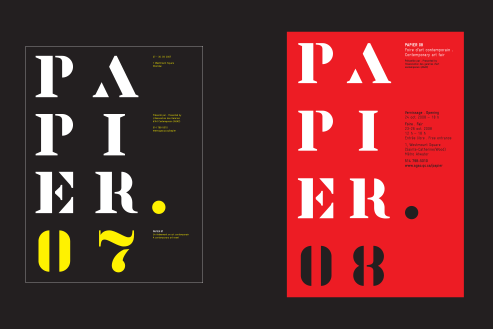 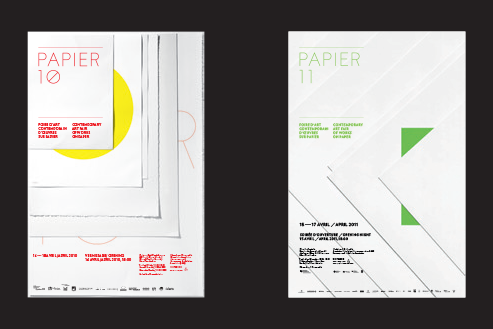 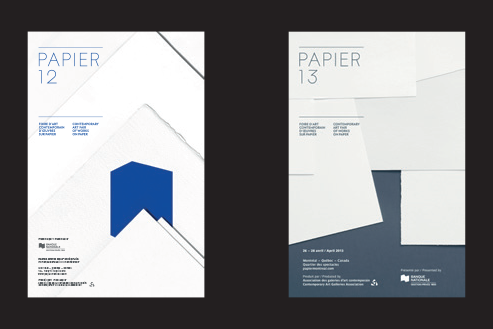 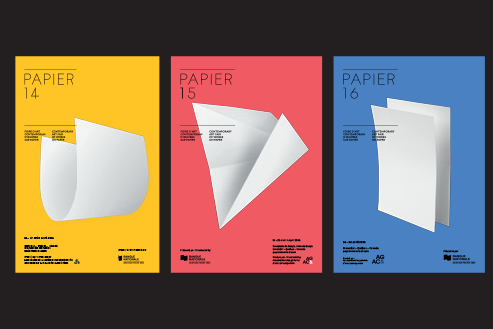 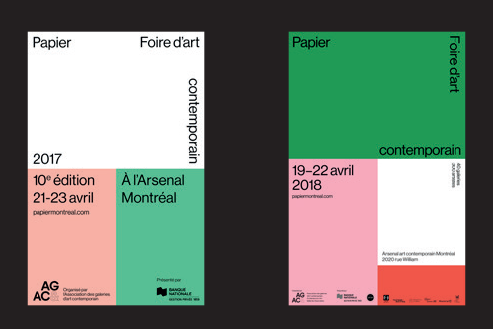 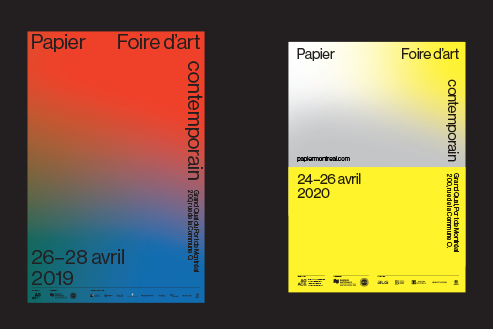 Papier07 and Papier08 posters.
History of the fair

Over the years, Papier has become increasingly popular, drawing a growing number of art enthusiasts and seasoned collectors. Papier has been an important springboard for many artists, as well as the galleries that represent them.

Papier was born in this impressive, glass-clad building designed by Ludwig Mies Van der Rohe, in the heart of Westmount. The event was part of the Journées de la culture program, and more than 150 guests attended the first VIP Opening and Benefit Preview.

The fair returned to Westmount Square for this second edition. More than 200 guests attended the VIP Opening and Benefit Preview.

After a one-year break, Papier was back in full swing at a new location: the Black Watch Armoury. With this new edition came a new tradition: Papier was now held in April. This third edition also featured the first educational program, consisting of a guided tour and a free catalogue distributed to all visitors.

Papier inaugurated its famed marquee tent at the Quartier des spectacles, at the corner of De Bleury and De Maisonneuve. The educational program was divided into an expert panel, guided tours and a satellite exhibition.

To mark Papier’s fifth anniversary, the educational program featured a variety of activities, including a VIP program and nine guided tours of corporate and museum collections.

Papier attracted more visitors from outside Quebec, making an even greater impact on Montreal’s art scene and the Canadian contemporary art market. This edition generated close to $ 700,000 in sales.

Along with the famed marquee tent in the Quartier des spectacles, there were several satellite exhibitions, held in locations across the city, including Émilie-Gamelin square and the Atwater Terrace. Papier also had the honour of welcoming spokesperson Karine Vanasse on board. The graphic identity designed by Jolin Masson won an award at the Grafika awards in the “Cultural Publication” category.

This year’s Papier event was held on three floors of the Complexe de Gaspé. Organizers took advantage of the vast space to expand the programming with works by the winners of the Pierre-Ayot and Louis-Comtois awards, a screening room and ten special projects. The impressive design for Papier15, by Architecturama, won a prize at the Canadian Interiors Best of Canada Design Awards.

Papier16 generated $1 million in sales, confirming its importance in Canada’s contemporary art market. Papier was also listed by the US magazine BizBash as one of the most influential events in Canada in 2016.

2017: an anniversary year for the 10th anniversary of the fair! On this occasion, a new, streamlined and contemporary visual identity is developed. A new venue, 39 galleries, 300 artists and an enhanced educational program: the panel discussions are video-captured. Papier is the recipient of a Grafika 2018 Grand Prix for the new graphic identity designed by Bureau Principal.

In order to allow the fair to develop and flourish even further, AGAC decides to introduce a paid admission. The Association is pleased to note that its public, composed of both art enthusiasts and collectors, was in attendance and that the sales were not impacted: on the contrary, they reached a record high once again, testifying to the notoriety and vitality of the event. In order to allow a wider public to benefit from the educational program, several panel discussions were webcast live on social networks.

The elegance and grandeur of this edition charmed visitors, who were able to experience a new place: the Grand Quay of the Port of Montreal. With a vast space bathed in natural light and an innovative and spacious layout, Papier Art Fair has reached maturity – elevating it to the same status as international fairs. It is in this unique context that, for the very first time, the fair opened to all artistic mediums and practices.

The 2020 edition was held virtually and in a particular context, at the heart of the global health crisis. Despite everything, visitors were present for this virtual edition. Papier remains a great gathering where visitors come to discover, admire or acquire works. This digital edition marks a turning point in the future of the fair, which will further develop this aspect for future editions.

The Contemporary Art Galleries Association (AGAC) is delighted to confirm the enthusiastic response to the fair’s return to the Grand Quay. What a pleasure for the organizer and the galleries to welcome back in-person the art lovers who took part in this important gathering. In addition to these figures, 21,000 unique visitors viewed the fair’s website from November 18 to 28, an increase of 16% compared to the virtual edition of 2020. In addition, throughout the fair, the public was present to attend the many panels and conferences that punctuated the educational program.